New Joe Hooks Novel on the Horizon slated for 2010

New Joe Hooks Novel on the Horizon slated for 2010 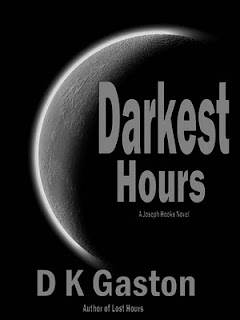 - Darkest Hours -
The explosive sequel to Lost Hours
-------------------------
To get his mind off his recent divorce, Detroit private investigator Joe Hooks takes what he thinks will be an easy job. He is to pick up a package from billionaire Montgomery Webb, an eccentric businessman. But Joe finds more than he bargains for when he discovers the billionaire tied to a chair, moments away from taking his last breath. Webb’s bizarre final words are, “Little doll lost.”

Joe enlists Kool-Aid, his ex-partner and best friend to aid him in finding out why the package is so important. The two friends are soon thrust into a situation that is quickly spiraling out of control. Pursuing the PI’s are cold-blooded killers, a government agency, and a mysterious Washington attorney known only as Shaw.

Joe becomes aware that the package could literally change the world, but has this discovery come too late?
Posted by Sylvia Hubbard at 6:21 AM