Posted by Sylvia Hubbard at 6:43 AM No comments:

BOOK INTRO: Murder on the Down Low


Posted by Sylvia Hubbard at 5:57 AM No comments:

An expanding group of female writers is at the forefront of a literary cultural shift. As a result, the typical protagonist in today's mystery novels is no longer white and male. He, and more often, she may range from a Puerto Rican prosecutor to a Japanese gardener to an African-American schoolteacher.

Asian writer Naomi Hirahara, who has been writing stories since she was eight, says her early characters "were always white—usually blonde and blue-eyed." When a fourth-grade teacher encouraged her to write about characters more like herself, she initially resisted that advice. Later, in college, after reading about the reparations movement for Japanese-Americans held in detention centers during World War II, her perspective changed.

"Learning about that historic experience and also reading many Japanese and Japanese- American authors opened a door for me. I've been writing mostly Japanese-American or Japanese characters ever since. The main character of my mystery series, Mas Arai, was inspired by my father, who, as a gardener, got little respect from strangers. I wanted to rectify that in my series. Mas is now the hero."

In Hirahara's third Mas Arai mystery, SNAKESKIN SHAMISEN (a 2007 Edgar nominee in the paperback original category), Mas, an atomic bomb survivor, becomes entangled in a world of heartbreaking memories, deception, and murder that reaches from the islands of Okinawa to the streets of Los Angeles.

It was a desire to see a totally different kind of sleuth that prompted Angela Henry to pen her first novel. "I wanted to create a character that I'd yet to see in mystery fiction," says Henry, "a single, educated, young black woman who isn't a member of law enforcement, or a private eye, and doesn't live in a big city." In her third Kendra Clayton novel, DIVA'S LAST CURTAIN CALL, the small-town Ohio school teacher and reluctant sleuth is called on to solve the murder of a Hollywood diva and find her best friend, who has disappeared just days before her wedding.

Former federal prosecutor Michele Martinez turned to writing as an outlet after leaving the U.S. Attorney's Office, where she spent eight years prosecuting big-time drug dealers and notorious gang bangers. "I was looking to re-experience a career I loved in a different format, and my protagonist was my alter ego," says Martinez, author of NOTORIOUS.

Martinez and her protagonist, Melanie Vargas, have a lot in common. They are both mothers and lawyers, they both come from modest backgrounds and have high-powered educations. And both are half Puerto Rican.

"I'm trying to show a Latina professional going about her day-to-day life," Martinez says. "Being Latina is part of who Melanie Vargas is, but it doesn't define her any more than being a lawyer or being a mother does. Her culture is woven into the story in a seamless way intended to acquaint a wide readership with a smart, tough Latina professional."


Do these authors of color have a particular message that they want to communicate to readers? Definitely.

This attempt at cultural honesty isn't always well received by the Japanese community. "When I write about gambling addictions and other secrets, some older Japanese-Americans feel that I'm airing our dirty laundry," Hirahara says. "But I feel that we should represent ourselves as whole human beings, not cardboard model minority stereotypes."

Neither Martinez nor Henry set out to create protagonists who are superwomen. "I'm trying to show a Latina professional going about her day-to-day life," Martinez says. "Her culture is woven into the story in a seamless way intended to acquaint a wide readership with a smart, tough Latina professional."

Henry echoes that sentiment. "Though my main character is a black woman, and sometimes deals with race-related issues, she also deals with all the same everyday issues that any other woman deals with. Job issues, relationship issues and family issues."

* * *
Attorney Pamela Samuels Young is the author of the legal thrillers Murder on the Down Low, In Firm Pursuit and Every Reasonable Doubt. Buying Time coming Fall 2009. Visit her website at www.pamelasamuelsyoung.com


Murder on the Down Low by Pamela Samuels Young

Buy Murder on the Down Low  at Amazon.com 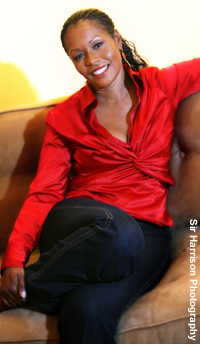 Pamela Samuels Young is the Essence bestselling author of Murder on the Down Low, In Firm Pursuit, Every Reasonable Doubt and the forthcoming Buying Time. The former journalist and Compton native is the fiction writing expert for BizyMoms.com and is on the Board of Directors of the Southern California Chapter of Mystery Writers of America. Murder on the Down Low raises awareness about HIV and AIDS in the African American community.

MURDER ON THE DOWN LOW by Pamela Samuels Young is an intense eye-opener!
A high-profile lawsuit erupts into chaos, revealing its place in a larger spree of violence in this scandalous tale of lust, lies, and vengeance. A brazen gunman is targeting prominent African American men on the streets of Los Angeles, and police are completely baffled.

At the same time, savvy big-firm attorney Vernetta Henderson and her outrageous sidekick, Special, lead the charge for revenge against a man whose deceit caused his fianceé's death.

For Special, hauling the man into court and suing him for wrongful death just isn’t good enough. While she exacts her own brand of justice, a shocking revelation connects the contentious lawsuit and the puzzling murders.


Purchase the books at Barnes and Noble.com


"Murder on the Down Low is an entertaining read, filled with heart-pumping suspense.   Pamela Samuels-Young weaves a sitting-on-the-edge of your seat plot that keeps you guessing and turning the pages!"

—Best-selling Author  Victoria Christopher Murray, The Ex Files
"Right up to the twisted and unexpected slam-bang ending, Murder on the Down Low will keep you teetering precariously on the edge of your seat the whole way through."
—The Book Club Queen

Waverly Sloan is a down-on-his-luck lawyer. But just when he's about to hit rock bottom, he stumbles upon a business with the potential to solve all of his problems.

In Waverly's new line of work, he comes to the aid of people in desperate need of cash. But there's a catch. His clients must be terminally ill and willing to sign over rights to their life insurance policies before they can collect a dime. Waverly then finds investors eager to advance them thousands of dollars—including a hefty broker's fee for himself—in exchange for a significant return on their investment once the clients take their last breath.

The stakes get higher when Waverly brokers the policy of the cancer-stricken wife of Lawrence Erickson, a high-powered lawyer who's bucking to become the next U.S. Attorney General. When Waverly's clients start dying sooner than they should, both Waverly and Erickson—who has some skeletons of his own to hide—are unwittingly drawn into a perilous web of greed, blackmail and murder.
(Book info: ISBN-10: 098156271X; ISBN-13: 978-0981562711)

Purchase the books at Barnes and Noble.com

Posted by Sylvia Hubbard at 11:59 AM No comments:

A Must Have For All Mystery Writers and Readers

I bought "Howdunit Forensics" from Writer's Digest Books to use as a reference tool when writing my own mysteries. I thought it would be handy book to peruse when writing to make sure the technical aspects of my mysteries were correct. No one was more surprised than me when I wound up reading it like a novel. Why? Because it's fascinating. The book is broken down into three large categories: The Forensics System, The Coroner and the Body, The Crime Scene and the Crime Lab. There are numerous sub-categories under each main heading and believe me, Lyle covers everything you would ever need to know when writing a mystery. Even if you're not a writer, but merely a lover of good mysteries, you'll enjoy this book.

Lyle writes in a style that is easy for anyone to understand and not too technical. Who else but a mystery writer would enjoy reading the steps in doing an autopsy? You can in this book, Chapter 3, The Autopsy: A look Inside the Body. Want information on trace evidence? Chapter 15: Trace Evidence: Sweating the Small Stuff. When you read the chapter about trace evidence, you'll see how many mistakes some of the popular crime shows make. You do know I hope that most of that stuff isn't accurate. CSI's don't carry guns, they do not question suspects and they'd never tell the M.E. what to look for at an autopsy! Of course, if they proceeded the way real criminalists do, the shows wouldn't be half as exciting.

I found the last chapter in the book, Criminal Psychology: Assessing the Mind, to be especially interesting. More and more we rely on forensic psychologist to give us incites into the criminal mind. No longer are we satisfied to say that a person committed a crime because he or she was crazy. We want to know why these men, and women, commit crimes, what motivated them. I especially liked the blue-back grounded side-bars throughout the book citing real cases and telling how forensic helped solve the crime and convict the bad guys.

D.P. Lyle, M.D. is the Macavity Award winning and Edger® Award nominated author of non-fiction books, "Murder and Mayhem", and "Forensics and Fiction" as well as the thrillers, Devils Playground and Double Blind.

He has worked as a story and technical consultant with many published authors and with writers and producers of several popular television shows, including Law & Order, CSI: Miami, Diagnosis Murder, Monk, Judging Amy, Cold Case, Peacemakers, House, Medium, and 1-800 Missing.

If you write mysteries this is the one reference tool you must have on your shelf.


Carlene Rae Dater has been a writer of both fiction and non-fiction for over 25 years and has been published in a variety of genres. Writing, reading and talking about mysteries is her passion. Please visit and leave comments on her mystery blog at: http://www.themysterystartshere.com - Please also visit her published books at: http://www.silveradopublishing.com

Posted by Sylvia Hubbard at 5:37 AM 2 comments:


Posted by Sylvia Hubbard at 5:28 AM No comments:

BOOK INTRO: WHO IS HE TO YOU


Posted by Sylvia Hubbard at 12:04 PM No comments: