From the author that brought you Mistaken Identity. The twins are back helping a friend find what he wants.

Grae is given the perfect opportunity to be someone she is not. She gives herself to the man she has dreamed about since high school.

With every twist and turn, Ezekiel Chambers finds that he can never be the son his father wants him to be. Now this mysterious woman has turned his world upside down and for the first time in his life, Ezekiel actually has a reason to stand up for what he wants against his cruel father.

Can Grae tell Ezekiel who she really is or should she just walk away from the best thing they've ever experienced? 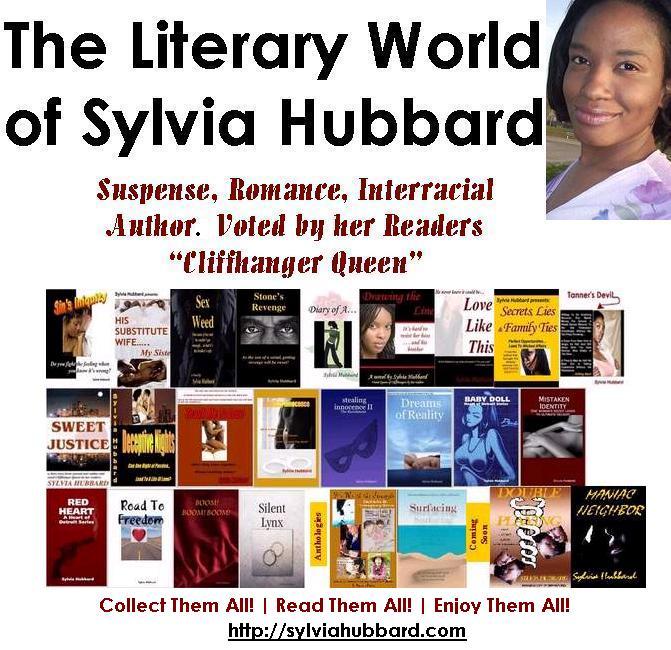 Posted by Sylvia Hubbard at 12:53 PM No comments:

by nmugomba:
I loved and appreciated that this book was free. I have followed this author since discovering her in 02 and I must say her writing gets better and better like wine. Keep what you are doing Ms Hubbard because it works, you don't hold any punches down but are not afraid to go there. I have bought and read some of your stories for free, you are talented and well done with this story. It was a pleasure reading it.
And if you want to know more about sub-characters appearing in this novel, please check out...

His Substitute Wife My Sister

Life has never been worth living for Charisse before her father died. After three attempts to kill herself were unsuccessful, she makes a deal for release from hell on earth, with one of the people who made her life what it was.

It wasn't until Chyna finds out that her husband, Parker Mills, was having an affair with her twin sister, Cheyenne, that she realizes she's losing the best thing she's ever had. Feeling the ultimate betrayal by her own sibling, Chyna knows she has to do whatever it takes to keep her husband and give him what he longs for - a baby. Knowing that she's unable to have children and Cheyenne is afflicted with the same condition, she decides to go to the only person that can help her save her marriage - her younger sister, Charisse.

In the end, one sister will die, another will lose everything and one will get everything that she wants.

Stress the benefits. Avoid subjective language like "the greatest" or "the best".

About Sylvia Hubbard
With twist and turns, Sylvia will make your eyes dance and your mind shudder as you read her short stories. Find out all about this fantastic author of mystery/romance & sensual/noir. Visit her literary world at:http://sylvia hubbard.wordpress.com

Stealing Innocence Itying a man down, leads to sweet payback

Deceptive Nights
can love be found in just one night?

Sin's Iniquity
Do you fight the feeling when you know it's wrong? Posted by Sylvia Hubbard at 4:21 PM No comments:

Posted by Sylvia Hubbard at 9:05 AM 7 comments:


Posted by Sylvia Hubbard at 7:41 AM No comments:


Posted by Sylvia Hubbard at 5:54 AM No comments:

Killing Off Your Characters

Killing Off Your Characters: How do you decide when it's time to kill off your characters?

www.FictionAddiction.net had a great forum topic on this subject (Read More... ). I decided to use my blog today to address it.

I'm a killer. I'll say it bravely and I let my readers know that I'll kill characters easily in a heartbeat when I feel that it would move the story forward or liven up the action.

It's almost never planned. I think the only real plan I had to actually kill someone off before the book died was in His Substitute Wife... My Sister. I knew one of those sisters had to die and it was so many times I wanted to kill off the lead character so bad because I hated the way she was too.

My initial "taste" into murder started with Stone's Revenge. This was my second novel. In my first novel, Dreams of Reality, there was death, but it was justifiable killing. The bad guy and the bad girl dying is no big thing. Murder occured in SR, where I killed young siblings of the main female protagonist and of course the big thing about the book was that I was dealing with "the son of a serial killer." A lot of the backstory had to do with his father and I even went back to his grandfather to show that there was no reason as to why the male protagonist was killing. "The apple don't fall too far from the tree theory."

There have been novels I haven't killed characters. A lot of drama and love ensued. matter of fact after SR, I wrote Deceptive Nights and I didn't kill anyone. Almost, but didn't.

When I start a story I usually know my main protagonists will be at the bottom of the bucket, but killing anyone in the story as I introduce characters I really have no intentions all the time. Now in Sin's Iniquity the decision to kill off one of the main characters came at a time when I knew reality had to step into the romance right quick because it was become to fluffy and nice. I didn't want a nice story for Sinclaire. I wanted evil and hurt and pain for her. That's cruel to say, but I did even though she was genuinely nice person and didn't deserve it.

It's not that I have these intentions in real life. Really not. I've been killing mad but not enough to hurt anyone.

But I always say I'm bad on paper and good in life.

I'd love to hear your views on killing off your characters.

Posted by Sylvia Hubbard at 5:19 AM 2 comments: