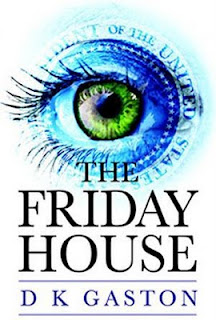 You can get your copy of The Friday House at: https://www.createspace.com/3344369
Story:
The Cold War ended almost two decades ago but the fruits of its labor still exist. The Central Intelligence Agency's `Resurrection Project', shut down since before the fall of the Berlin wall, laid dormant and was all but forgotten—until now.
Without warning or explanation, prominent American citizens began carrying out horrendous crimes. Immediately after these acts, they would kill themselves. FBI Special Agent JAMAICA KURTZ, upon her return to duty after a six month medical leave, is immediately assigned to conduct a profile of these killers.
In the meantime, the United States is threatened by a new fanatical group called the RSFA. President RONALD MOSS a man with good intentions must make hard decisions that will not only affect this country but those closest to him. All the killers have one thing in common, The Friday House Orphanage. What secrets does this place hold and will Special Agent Jamaica Kurtz find out the truth in time to stop more attacks?
Search Amazon.com for D. K. Gaston

Posted by Sylvia Hubbard at 6:23 AM No comments: 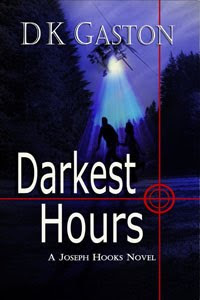 Darkest Hours
ISBN: 9781451542691
Author Name: D K Gaston
Author’s Website
http://www.dkgaston.blogspot.com
100 word Synopsis about book, Darkest Hour
PI Joe Hooks takes what he thinks is an easy job. He’s to pick up a package from billionaire Montgomery Webb. But Joe finds more than he bargains for when he discovers Webb moments away from taking his last breath. Webb’s bizarre final words are, “Little doll lost.”
Joe enlists Kool-Aid, his best friend to aid him. The two are thrust into a situation that quickly spirals out of control. Pursuing them are cold-blooded killers and a mysterious attorney named Shaw.
Joe becomes aware that what he holds could literally change the world, but has this discovery come too late?
Genre of book:
Mystery thriller
How do you come up with story ideas and characters? (if fiction)

I honestly can’t say where my story ideas come from. Sometimes I’m driving along in my car when an idea strikes me, or I’m home playing with the kids. As far as characters, I pull them from my personal past and from people I meet. Any one can become a potential character in my stories if something about them stands out to me.
• When and how do you write?
Whenever I have a break I sit down and write, but mostly it’s in the wee-hours of the night. I sit in front of the computer with my coffee or tea and let the words flow.
• What other authors inspire you?
There are so many, but to name a few, Walter Mosley, Dean Koontz, Stephen L. Carter, Steve Berry, and James Patterson
• How did you find your publisher?
Through online searches mostly, but also word of mouth from other authors.
• How long does it take you to write a novel?
It differs, for my first drafts it spans from three months to a little more than a year. It depends on the complicity of the book I’m writing; The Friday House, definitely fit into the latter category.
• How do you overcome writers block?
I don’t really have writers block. If there’s a period where my mind drifts, I temporarily move on to another story, or I start editing a first draft, until my full concentration returns to the project I’m supposed to be working on.

The key is to never stop writing.
• What’s your next project?
I’m currently working on a fantasy adventure called, Taurus Moon: Relic Hunter. I have a first draft of a mystery completed called, The Promise. After I finish the draft to Taurus Moon, I will begin my second draft of The Promise.

I also have some sequels I have to work on for XIII, The Friday House and the Joe Hooks series. I’m going to be pretty busy for a while.
• How long have you been writing and how did you get started?
I have been writing since I was a kid. I started with drawing/writing comic books with my friends. I began professionally in 2005 and had my first book published in 2007.
• How does your background influence your books?
I used to be a soldier, served in the US Army full time for five years and also a number of years in the Reserves and National Guard, so a few of my characters have military backgrounds.

I’m in the computer field. And you’ll often find my characters using technology to their advantage throughout my novels.

I’m also a movie and history buff and as I told you I wrote comic books as a kid, so don’t be surprise to read a lot of references pertaining to those influences as well.

Author Spotlights
Highlighting your literary project on our website, through our mail list and our social networks…CLICK HERE
Posted by Sylvia Hubbard at 11:26 AM No comments:

Darkest Hours by DK Gaston ... Detroit PI's Joe Hooks and Kool-Aid are back

Darkest Hours is now available for the Kindle for $2.99. Detroit PI's Joe Hooks and Kool-Aid are back.

Many of the novels produced today have fight scenes which must be described in detail. If you are writing a suspense or horror story, chances are someone will throw a few punches. Depending on the type of fight you are writing about, you will need to think through each fight scene and decide exactly how you want to tell it.

Fight scenes are much easier to perform on television than to write in a manuscript. On the screen, you can see the fight happening and you aren't worried about what anyone is thinking. You don't have to tell the audience how each move is executed because it is right there in front of your face. In a novel, however, the way you write a fight scene will determine whether or not your reader can follow.

One of the most difficult aspect of writing fight scenes is the tendency to slip into monotony: He kicked her. She kicked him. He punched her. She bit him. In order to keep your reader interested, you have to find creative ways to tell the reader what is happening.

When writing fight scenes, focus not only on the characters who are engaged in the fight, but also various aspects of the scenery. In most cases, you will be "in the mind" of one specific character, which means that the fight is explained from his or her point of view. Even as your character is kicking ass and taking names, he or she should be cognizant of the world around them.

There is a fine line, however, between creating enough description and creating so much that it takes away from the pace. Fights are fast, furious and often over within minutes; if you drag it out too long, your reader will get bored. Keep the pace flowing by intermixing your description with the mechanics of the fight.

"Caleb was momentarily distracted by the shouts that emanated from the rapidly growing crowd in the parking lot. Catcalls were followed by cheers of encouragement so loud that his attention was momentarily called away from the fight. Joshua's leg swept out in a wide, graceful art, connecting with Caleb's ankles, throwing him off balance. Without even realizing what exactly was happening, Caleb found himself flat on his back, sucking in deep breaths of air that seemed devoid of oxygen, wincing as tiny pebbles from the asphalt dug painfully into his back. The subsequent tunnel vision that threatened to take away his sight cleared with just enough time to roll away from a kick to the ribs."

The above is an excerpt from a suspense novel I wrote several years ago, and displays an example of complementing action with description. We know what is going on with the fight, but we also understand what has happened to Caleb.

Once you have finished writing a fight scene, read it over aloud. Listen to the words from an objective point of view and determine if you can see the fight happening in your mind. If you don't feel that you can maintain objectivity, read it to a friend or family member.

Laura J. College is a professional ghostwriter with more than ten years' experience writing fiction and non-fiction manuscripts. Her work can be found all over the Internet, and she is currently accepting ghostwriting clients. Check out her website at [http://www.laurajcollege.com]
Article Source: http://EzineArticles.com/?expert=Laura_College
Posted by Sylvia Hubbard at 8:05 AM 1 comment: